Ste. Anne’s Basilica: A Place of Faith, Hope and Service

On March 1, 2020 Archbishop Vigneron announced that Pope Francis has granted the title of Minor Basilica to Ste. Anne Church in Detroit. “As our founding parish, Ste. Anne was among the first fruits of a new missionary diocese. In the church’s designation as a basilica, it will stand as a profound reminder to all who visit of our continuing mission to unleash the Gospel in our communities,” Archbishop Vigneron stated in the Archdiocesan announcement.

Ste. Anne is one of 86 churches in the United States—and only the third church in Michigan—to hold the title of Minor Basilica.The title is given to churches around the world to denote a particular importance in the liturgical and pastoral life and a closer relationship with the pope.

Ste. Anne Parish de Detroit was founded in 1701 and is the second oldest continuously operating parish in the United States. Ste. Anne’s basilica is a place of pilgrimage for thousands and is the burial place of Fr. Gabriel Richard. It is also a vibrant, multicultural parish that hosts an abundance of ministries. 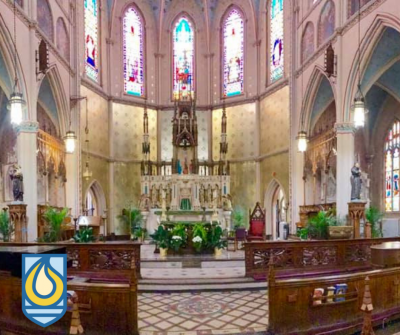 “When I made a pilgrimage to Ste. Anne Church and attended mass there for the first time a couple of years ago, I was really captivated,” shares Frank Roney, who is chair of the renovation project committee. “It has been a rock for the Catholic faith in our city and has been a spiritual home for so many immigrants to Detroit, especially the French, Irish, and Hispanics. So I was moved to help in the efforts to restore the basilica to its former glory”.

The parish is preparing for a $23 million restoration campaign. Phase one is to raise $15 million for exterior repairs and an HVAC system. In addition, in 2017 Msgr. Kosanke, through the support of generous patrons, opened the Ste. Anne de Detroit Restoration and Maintenance Endowment with the Catholic Foundation. This fund helps ensure ongoing operating and maintenance costs in perpetuity. 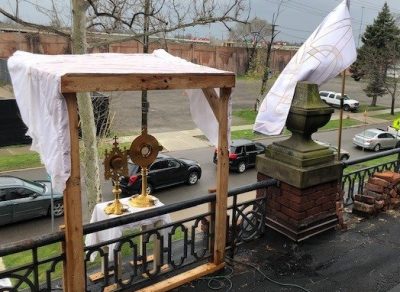 During the recent stay-at-home order, the parish offered Eucharistic adoration from the roof as well as parking lot confessions. They also brought a Eucharistic procession to the streets, which was an idea that started with the youth, who wished to share the opportunity for Eucharistic adoration with those who were elderly or sick. “There were bells ringing and speakers playing contemporary Christian music in Spanish throughout southwest Detroit. It was really beautiful,” shares Fr. Ryan Adams, Associate Pastor.

Many parishioners and their neighbors are currently out of work, due to the pandemic. The parish’s weekly food pantry have seen greatly increased needs, from 30 families to 150 families weekly. Ste. Anne’s has worked to find funding to help those in need cover immediate needs like utilities payments. “We are not a rich parish, but we want to make sure those inside our community and in our neighborhood have their basic needs met,” shares Fr. Ryan.

The parish also offers a lot of programming for the youth. “The majority of the youth are Latino, and they have been raised with a strong-rooted Catholicism. For them, family life is so important and really nourishes their faith,” Fr. Ryan says. 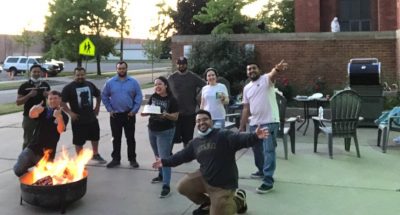 Faith formation for youth includes Jornadas (the retreat program, whose name is the Spanish word for journey, received a Catholic Education and Formation grant from the Foundation in 2018) and a youth group called Corazón Puro (pure heart in Spanish) that promotes Theology of the Body. The youth are trained to evangelize to other youth, and they are even developing their own initiatives. “They are doing it because of their own zeal and love of the faith,” shares Fr. Ryan. 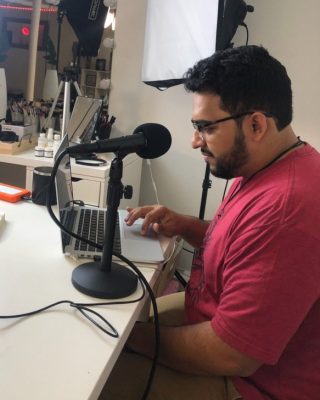 One of these leaders, 25-year-old Ricardo Hernandez, has been inspired to create a podcast called Café con Santos (coffee with saints in Spanish) to share about the faith in inviting ways. He is grateful to have the opportunity to be involved in so many different events at the parish which enrich his faith. “I had an encounter with Christ in 2016 during the Jornadas retreat. I learned that my life had a purpose, and I was also prepared and challenged to bring other people to that truth in Christ. That truth has become more clear after experiencing the Corazón Puro retreat. With so much formation it becomes easier to do things that previously seemed difficult.” .

Later this month, from July 17-26, the parish will host its annual novena leading up to its feast day. This is one of Detroit’s oldest devotions and has been going on for over 100 years. It typically draws in thousands of pilgrims who come to venerate the basilica’s relics. This year, the in-person masses will also be live-streamed. Each day of prayer will honor the cultures of a different region of the world represented in the Archdiocese. The feast day of Ste. Anne is July 26. Ste. Anne’s hopes you will join them in prayer and celebration during their novena and feast day!

GIVE TO THE STE. ANNE PARISH ENDOWMENT