“Austin is special because of the strong sense of community and family atmosphere,” shares Janel Coppens, Head of School of Austin Catholic High School. “Our focus on inviting all to our table is rooted in the Augustinian pedagogy and our core values of Truth, Unity and Love. We are part of a network of Augustinian schools (including Villanova University), around the world,” she continues. 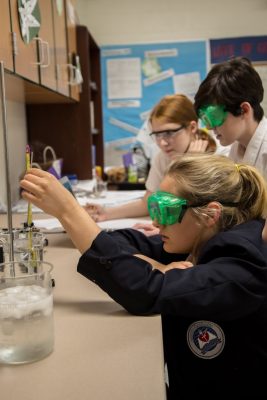 “At Austin we are about community, our school community and the community at large. We guide our students toward seeking the truth from self-awareness, academics, and seeing God in others. This is instrumental for our students to become compassionate leaders,” reflects Kelli Horton, Executive Director of Institutional Advancement.

Austin Catholic High School was a dream of many Catholic lay leaders in Macomb County since the early 1990s. In 2002 the Archdiocese of Detroit asked the Augustinians of the U.S. Midwest Province to sponsor and operate the new school. The Augustinians had founded and operated the original Austin Catholic Preparatory High School on Detroit’s east side from 1952 until it was closed in 1978.

In 2017, a group of Austin Catholic Prep Detroit alumni that are involved with Austin Catholic High School wanted to recognize various members of their classes and make a gift to the new school, in recognition of the outstanding education they received from the Augustinian friars of their days. The Austin Catholic Prep Class of 1963 was the first to create a scholarship endowment through the Catholic Foundation of Michigan. They challenged other alumni groups to match their gifts. Since then, three other endowment funds have been opened for Austin High School. 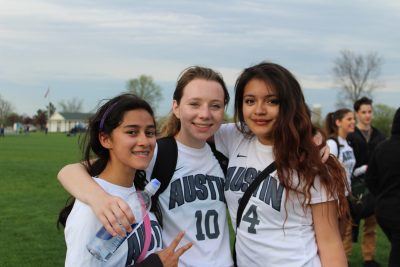 “Our Board of Directors believes that a Catholic education should not be just for the elite and they work to provide opportunities for all,” shares Coppens. The four endowment funds held by the Catholic Foundation of Michigan help make this possible by providing tuition assistance for Austin Catholic High School students.

The Augustinian Scholarship endowment was started with a gift from the Midwest Augustinians to support the future of Austin Catholic and more generations of students. Two other endowment funds were opened in memory of an Austin Prep alumnus who has died. The Gary Evatz Memorial Scholarship endowment was created in memory by his wife, to honor his legacy and support of Austin and how much he valued his Catholic  education. 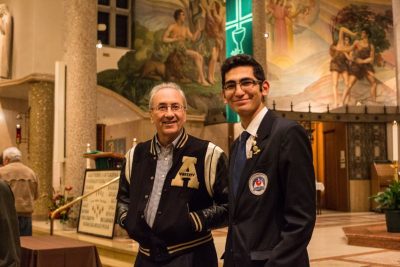 The Sharon and Rick Pine Scholarship endowment was created in memory of Rick by his wife Sharon and alumni of the Class of ’63. Rick was a standout athlete for Austin Prep Detroit and had the distinction of breaking a record in basketball previously set by famed player Dave DeBusschere.

Before Rick’s untimely death 14 years ago at age 60, he had been very involved, alongside other alumni from the Class of ’63, in trying to open a new Austin High School.

“Rick was well-liked by everyone and was very committed to seeing the new high school open. His high school class really stuck together; their experience had been transformative and they wanted to make that possible for students today,” says Sharon Pine. “Catholic schools are so important for the moral formation of young people and I am grateful that this endowment is helping provide that opportunity,” she continues.

Endowments are permanent funds that hold their principal in perpetuity and are invested for a particular purpose, such as tuition assistance. The endowment fund grows and makes annual distributions that support a beloved school for generations to come. They are a meaningful way to leave a legacy. 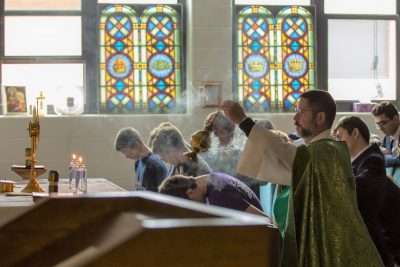 Austin Catholic High School has found the experience of working with the Foundation to be positive. “The Catholic Foundation has been helpful and supportive of Austin and our goals to build funds that will support our school and families well into the future,” shares Coppens.

For those who are interested in getting to know the school better, the staff and students invite you to visit. She says, “We are small but mighty. Our students, staff, and families agree there is nothing quite like an Austin education and the value speaks for itself. Come and experience the Austin Advantage.”

The Catholic Foundation is committed to ensuring the holistic formation of our Catholic school students as joyful missionary disciples, for now, and for generations to come. To join us and open up an endowment for a school that you love, click here.

Give now to one of the Austin Catholic High School Endowments

Create an endowment for a Catholic school that you love.