St. Katharine Drexel: A Model for Standing Against Racism

St. Katharine (1858-1955) was born in Philadelphia as the second daughter of a prominent banker and was no stranger to philanthropy. When Katharine’s father passed away, he donated a portion of his estate to various Catholic charities and left the rest to his three daughters. Shortly after their father’s death, Katharine and her sisters made a significant contribution to the St. Francis Mission on the Rosebud Indian Reservation. Later in an audience with Pope Leo XIII, the pope suggested to Katharine that she become a missionary and support American Indian missions. 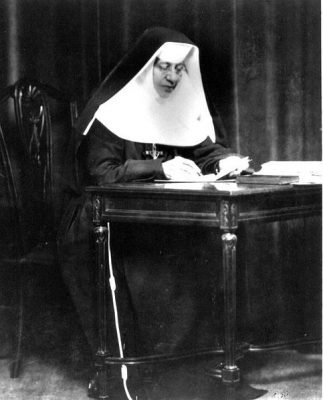 Katharine responded to that invitation and at age 33 she established a new religious congregation, the Sisters of the Blessed Sacrament. Her order opened numerous schools to serve American Indian and African American communities and also founded Xavier University in New Orleans, which is the only Catholic Historically Black College/University (HBCU).

Today, the Sisters of the Blessed Sacrament remain dedicated St. Katharine’s mission to “challenge all forms of racism, as well as other deeply-rooted injustices.”

St. Katharine’s challenges to racism were part of her faithful response to God’s calling on her life. On numerous occasions, she risked her safety to be faithful to this fight against racism and injustice.

In an article written by Franciscan Media, we learn about The Legacy of Saint Katharine Drexel and the prophetic ways she stood confidently to promote human dignity.

Throughout her life, when people within and outside of the church sought to intimidate, limit or prevent her work for racial justice, St. Katharine bravely persevered in her work to further God’s kingdom. By the time she died in 1955, there were more than 500 sisters in her order teaching in 63 schools throughout the U.S. St. Katharine also established 50 missions for Native American peoples in 16 states.

At Catholic Foundation of Michigan we are actively discerning concrete ways we can confront the sin of systemic racism in our community. We stand in solidarity and prayer with all those working to confront the sin of systemic racism that has caused so many tragic acts of violence towards our Black brothers and sisters and people of color. The Foundation’s grants to schools and organizations serving marginalized populations living in under-resourced areas continue St. Katharine’s legacy of prioritizing high-quality education for oppressed peoples.

St. Katharine Drexel, tireless intercessor for social justice and integration, pray for us as we work for racial justice in philanthropy!