Memorializing the Felician Sisters of Livonia

When the Felician Sisters established the Presentation of the Blessed Virgin Mary convent in 1936, Livonia was just a small town of farm fields outside of Detroit.

“The city has grown up around them and because of them,” says Patty, a graduate of Ladywood High School, a ministry of the Felician sisters from 1950 to 2018. “I was a first-generation college graduate. The sisters were mostly Polish immigrants and they gave me the idea that I could go further in life.”

Twenty-two cases of COVID-19 have been confirmed at the convent and 12 sisters have died since April 10, at least eight of them directly from the disease. The community was home to 56 sisters before the coronavirus outbreak.

Angela Moloney, President and CEO of the Catholic Foundation and an alumna of Madonna University, was deeply moved by a sense of profound loss for the Felician community and the impact of losing so many sisters so quickly. She felt called to respond and invite others to join her in creating a fund to support the sisters.

“This is an opportunity to let the sisters know how much we care about them and support them in this difficult time,” Angela says. “I’m excited that the sisters are willing to accept this fund as a gift of hospitality.” 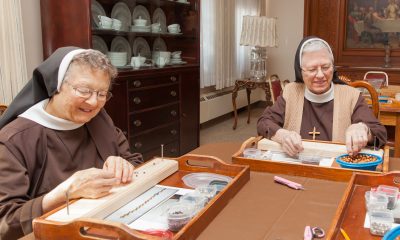 The immediate needs that have been identified for the Livonia community are burial expenses and care for the sisters. While so many sisters were sick, the community had to hire additional nurses and caregivers. There were unanticipated additional costs related to staffing, sanitizing, purchasing prepackaged food items, and securing personal protective equipment.

The new support fund is a donor designated fund, which makes it simple for an unlimited number of donors to contribute to the sisters in a variety of ways (such as via credit card, a check, or a gift of securities). The fund is restricted to support of the sisters, and it can go out in an amount and frequency that is most helpful for them.

When making a gift to the fund, donors are encouraged to share a story of a sister who has had an impact on them. These stories will be collected and shared with the community.

Angela is grateful for the many lessons learned from the sisters. She learned about social justice from Sr. Mary Martinez Rozek, who coordinated a Multicultural Club at Madonna University before other institutions addressed diversity. She learned about compassion while volunteering in the Sisters’ infirmary under Sr. Victoria Marie Indyk. Both sisters passed away in April.

“I would not be who I am today, without the inspiration, leadership and wisdom of the Felician Sisters of Livonia. This is the least I can do to give back to them,” Angela says.

Other local leaders have recognized the impact of the sisters too. 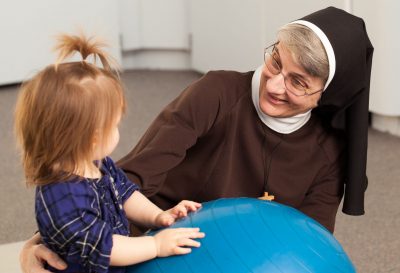 Sen. Dayna Polehanki, who recently held a moment of silence on the Michigan Senate floor in honor of the Felician sisters in Livonia, notes their long legacy of service.

“The pandemic has had a devastating impact on the convent in Livonia,” Polehanki says. “Now, in their time of need, I encourage others to join me in donating to support these remarkable women.”

Livonia mayor Maureen Miller Brosnan reflects, “The Felician Sisters are not only integral to the foundation of healthcare and education in the City of Livonia, they are integral to my personal foundation. I was taught by the Felicians at St. Michael Catholic Schools, and my children have been taught by Felician Sisters at St. Michael’s and the Montessori Center of Our Lady. They are part of who I am today.” She continues, “The Felician legacy of unconditional compassion for people, coupled with their inherent desire to meet the community’s most basic needs in healthcare and education make them inspiring, strong women.  We are saddened by the loss of so many sisters but we will be forever grateful God placed them in our city.”

Sister Mary Christopher Moore, CSSF, provincial minister, is grateful for the tributes to the sisters on the floor of the state senate and in the media. “This outpouring of love and support in our hour of need is God’s Providence in action,” she says. “We are humbled by the generous spirit of the Catholic Foundation of Michigan that has embraced our Sisters during these unprecedented times.

Archbishop Allen Vigneron recognizes the local impact of the Felician sisters. “For generations,” he says, “the Felician sisters have labored to bring the love and message of Jesus to innumerable souls in the Archdiocese of Detroit. Jesus assures us, ‘Blessed are the merciful, for they will be shown mercy.’ I am grateful that the sisters now will be able to more readily receive support from those who often were once recipients of their own selfless sacrifices.”

To learn more about the Felician Sisters of North America, visit https://www.feliciansistersna.org/.

Update: As of August 28, 2020 we have distributed roughly $20,000 to the sisters through the kind generosity of nearly 800 donations from supporters in 35 states and four countries. Read more.

Remembering the 12 Felician sisters who died in April and May: