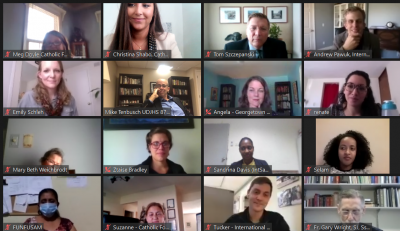 The Catholic Foundation was honored to host an exclusive virtual event on November 12th on behalf of the Jesuit Friends and Alumni Network featuring speakers from our ministry partner, International Samaritan.

International Samaritan’s Mike Tenbusch and Selam Terefe led an engaging conversation about the challenges being faced by people living in some of the most impoverished communities in the world.  The conversation focused on the lives of people making a living in the informal economy surrounding some of the largest garbage dumps in the world. The speakers shared inspirational ways their teams are overcoming the virtual shut down of the jobs in these communities due to coronavirus related restrictions.

Participants on this virtual workshop also had the opportunity to attend a smaller, break-out session during the second half to hear from and talk directly with the leaders of International Samaritan across the world. The nations that were featured included Ethiopia, Guatemala and Jamaica.

The recorded virtual session is available to view below.

International Samaritan walks hand-in-hand with people living in garbage dump communities of developing nations to help them break out of poverty.  It was founded in 1994 by Father Don Vettese, S.J. and a car filled with students from St. John’s Jesuit High School in Toledo who were so horrified by the conditions that they saw in a community around a garbage dump that they stopped to ask how they can help, and thousands of students from Jesuit high schools across the country have been responding to that call ever since.