The Men of the Sacred Hearts of Jesus and Mary (MSH) began over 100 years ago by Fr. Mateo as an apostolate to strengthen the family through prayer. Their ministry brings a 3-foot statue of Our Lady of Fatima, along with an image of the Sacred Heart of Jesus and the Immaculate Heart of Mary, into the homes to which they are invited. The family is encouraged to pray the rosary together and pray for each other during the week that the statue of Our Lady is visiting. John Lo Vasco began a chapter of Men of the Sacred Hearts in Detroit in 1964 and served as its president until 2014. He introduced a wide range of people to host the traveling Our Lady of Fatima statue in their homes, schools, and businesses in Michigan and throughout the U.S. and Canada. Upon leaving each home, John would consecrate the family to Christ. This ministry flourished until John had attracted over 40 people, in teams of two, visiting thousands of homes. 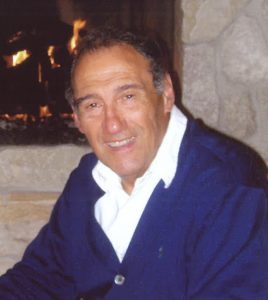 “Nothing got done at the LoVasco house after dinner until we said the family rosary. My dad saw mass and the rosary as a healing medicine that he needed daily,” Gene LoVasco, one of John’s 10 children, reflects.

“John was the perfect promoter for this ministry as he worked tirelessly to bring as many people as possible closer to Jesus and His Mother through the Holy Rosary. John would stand at any church door and pass out sign up cards in any type of weather,” reflects David Tay, Executive Director and Chairman of the Board of the Michigan MSH chapter. “He was a passionate speaker and was gifted in motivating our membership.”

Two of John’s sons, along with another supporter, wanted to insure the sustainability of the MSH when John was ready to retire. “John could raise money by making a phone call, but that was a special gift that not all of us had,” David shares. So an insurance policy was taken out in John’s name with the Men of the Sacred Hearts as the beneficiary. After a full life of 90 years, John passed away in September 2019.

“He will be remembered for his stories and humor, but they were his way of warming people’s hearts so he could ultimately get to their souls. He was a great husband, father, and businessman, but in the end, it was his zeal for the Lord that consumed him,” Gene shared in his eulogy for John.

The MSH has a healthy revenue stream from its annual appeal, donations from home enthronements, and annual yearbook. However, they were seeking a longer-term opportunity to fund the growth of their ministry. With John’s passing and the money that came from the life insurance policy, the organization launched the John LoVasco Men of the Sacred Hearts Endowment.

“When I met Angela [President and CEO of the Catholic Foundation], I was impressed with her comfort level at talking about endowments and long-range planning. She created a sense of trust that the Catholic Foundation is going to be here for the long haul, and with moral investing guidelines that made us all feel comfortable,” David shares.

The current focus of the MSH is to attract young families to daily prayer in the home. They have been increasing their communications through video and online, as well as billboards in the Detroit area. This advertising is resulting in more people visiting their website and contacting them. “This kind of advertising has been beyond our budget in the past, but now with the endowment, we can target more funds for social media advertising that reaches our target audience of young parents,” David says.

“MSH has impacted thousands of peoples lives by enthronement of their homes and businesses to the Sacred Heart of Jesus. By making Jesus the spiritual head of your family and business is life-changing. John was the persistent, joyful cheerleader for over 40 years. One of the many priests presiding at his funeral said to me afterward, ‘what a send off!'” shares Frank Migliazzo, a longtime friend of John LoVasco.

We hope that you’ll help us continue our support of the John LoVasco Men of the Sacred Hearts Endowment in order to increase their ministry’s reach to young Catholic families in Michigan for years to come.

SUPPORT THE JOHN LOVASCO MEN OF THE SACRED HEARTS FUND

Learn about the many ways to give to the beloved ministry of your choice, including through a life insurance policy.