DAF To Educate about Human Trafficking

This year, Greg and Phyllis DeMars used their Donor Advised Fund (DAF) with the Catholic Foundation in a unique way – to support an effort to educate healthcare workers about human trafficking. Human trafficking is the crime of buying or selling persons for labor or sex by force, fraud or coercion. Michigan is ranked sixth among all states in human trafficking cases reported.

The DeMars family felt called to make a difference after Phyllis went to a talk on human trafficking with the Fontbonne Auxiliary. “The talk was so powerful; it literally haunted me. I had no idea the depth of the issue; who it touches and how prevalent it is in our community–the person sitting next to you in church or the man who cuts your grass could be being trafficked. It opened my eyes and I felt compelled to act,” Phyllis shares. 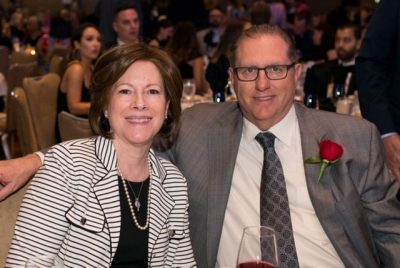 The couple approached the community health office at Ascension St. John Hospital in Detroit, another Catholic institution they support, to inquire as to their needs in their efforts to combat human trafficking. The hospital was seeking funds to train their healthcare staff about human trafficking and how to identify potential victims.

According to a 2015 article in Modern Healthcare, 88% of trafficking survivors report having contact with the healthcare system while they were trafficked. A person who is being trafficked and in need of medical care would often be taken to the emergency room because they may not have a regular provider.

“Individuals trapped in the horrors of human trafficking do not come into our offices, clinics or emergency rooms with badges or stickers labeling them. It is critical that we train caregivers to pick up on the subtle findings that would allow us as clinicians to find and protect these victims,” shares Ascension St. John Hospital President, Dr. Kevin Grady.

“A critical part of our mission at Ascension is to protect the vulnerable. Educating individuals about human trafficking will allow us to maintain this mission and help the victims of human trafficking back to a safer and happier life,” Dr. Grady continues.

“The Catholic Foundation was very flexible and wanted to support us in our desire to fund this effort. They helped us get it accomplished.”
—Greg DeMars, Donor Advised Fund holder

When Greg and Phyllis had originally set up their DAF, they had looked at some mainstream financial services companies, but chose the Catholic Foundation because they knew their money would be invested in accordance with their Catholic values. “We were attracted to the fact that the Foundation also makes its own grants to Catholic organizations and that they are expanding and helping to support the Archdiocesan Unleash the Gospel movement and Sent on Mission fundraising effort,” Greg shares.

They have also been impressed with the flexibility of the Catholic Foundation to help them accomplish their philanthropic goals based on their specific desires. “Technically we used our DAF to set up an endowment with the St. John Hospital Foundation, because that is what made the most sense in order to make sure this education program was funded at the hospital. The Catholic Foundation did not have a problem with that, they wanted to support us in our desire to fund this effort. They helped us get it accomplished,” reflects Greg.

“We’re both faith-filled and feel blessed, and want to be able to share our blessings with others. It is our mission as Catholics and Christians to help others in need,” shares Phyllis.

To learn more about human trafficking or ways to give in line with the DeMars family, contact the Catholic Foundation.

How can your donor advised fund make a unique impact?

DEFINE YOUR LEGACY: OPEN A FUND